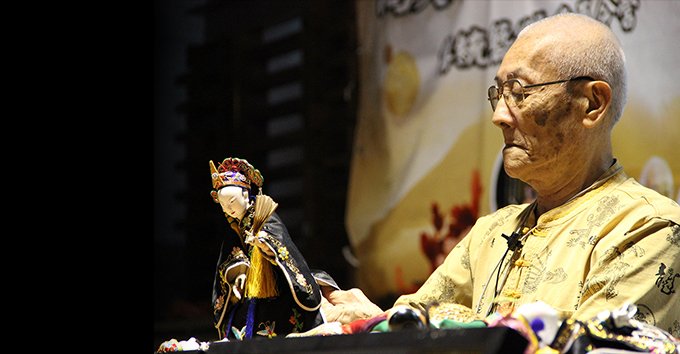 Chen Hsi-huang, who is in his 80s, is the son of Taipei “I-Wan-Jan Puppet Theatre Troupe” master puppetry artist, Li Tien-lu. Li Tien-lu is the son of “Hua-Yang-Tai Puppet Theater Troupe” leader, Hsu Chin-mu, who learned puppetry from “Chu-Yang-Tai Puppet Theater Troupe” puppeteer, Hsu Chin-shui, a protégé of the puppet artist, Chen Po, from the prefecture Chuanchou in mainland China’s Fujian Province. Chen Hsi-huang was born in 1931, the same year when Li Tien-lu single-handedly founded the “I-Wan-Jan Puppet Theater Troupe.” In 1953, Chen Hsi-hunag founded the renowned “Hsin-Wan-Jan Puppet Theater Troupe” in order to give performance tours in the Greater Taipei Area. After the “Hsin-Wan-Jan Puppet Theater Troupe” was disbanded in 1975, Chen Hsi-huang founded the “Chen Hsi-Huang Traditional Glove Puppet Troupe” in 2008 to unremittingly develop and pass down Taiwanese puppetry. Skilled at front stage performances and backstage support, and having the experience of living in central and southern Taiwan for some periods in his youth, Chen Hsi-huang liaised and collaborated with then-famous Taiwanese puppet theater troupes to bring together favorable performance techniques from southern and northern puppet theater troupes to develop his own distinctive performance arts. These then-famous troupes included the “Wu-Chou-Yuan Glove Puppet Theater Troupe,” the “Hsin-Hsing-Ku Puppet Show Troupe,” and the “Yu-Chuan- Ko Puppet Show Troupe.” Each of these groups had their respective regions of dominance in earlier years. With masterly skills in operating puppets, he brings to life various roles in glove puppetry such as sheng (old and young male characters), dan (old and young female characters), jing (male characters with painted faces), mo (old men),and chou (comic characters); they are agile, lively, and as real as life in his hands. Other than that, Chen Hsi-huang is also skilled at crafting elaborate and sophisticated puppet headgears, weaponry, and props, and draws all costume models and makes all embroidery patterns and needlecraft for his own troupe. Stereoscopic puppet headgear in his troupe is constantly adjusted for more secure fixture on puppets during performances. Other than being popular in puppet shows, his stereoscopic puppet headgear has also been sought after among collectors of crafts in recent years. His practical and durable puppet headgear with graceful and exceptional color combinations also made Chen Hsi-huang the only artist who received the title of “national-treasure artist” in two fields of puppetry accorded by the Taiwanese government.