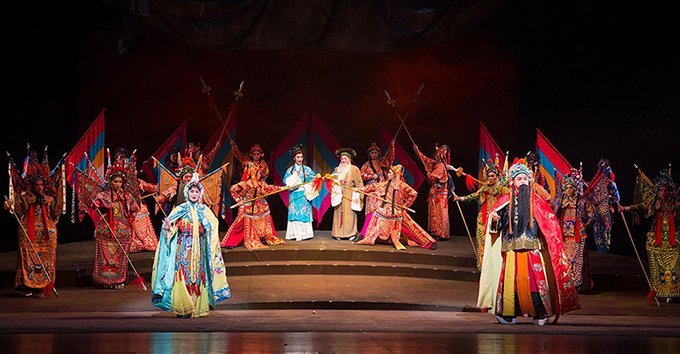 As a grand show to celebrate the 25th anniversary of the Rom Shing Hakka Opera Troupe, Hegemon-King of Western Chu and Consort Yu bravely integrated elements of Hakka Opera, Beijing Opera, and Taiwanese Opera. In addition, the national topnotch actor Chen Lin-tsang from mainland China was specially invited to direct and act as the protagonist, the multitalented Taiwanese Opera diva Hsiao Mi as a storyteller, and the troupe’s principal actor Chiang Yen-li alongside other young performers also acted in the show to interpret a historical account about the unswervingly loyal love between Hegemon-King of Western Chu Hsiang Yu and his concubine Consort Yu.

Professor Tseng Yung-i, who is also the screenwriter for the show, believes that despite the dubious equivalence between historical dramas and history, the purport and thoughts that a historical drama intends to express and convey should be based on historical truth as well as features and traits that form each historical figure’s nature in order to present a natural and fascinating show. Given such insight, the screenwriter invested time and energy into relevant studies to equip himself with comprehensive historical knowledge before the script came into being. The screenwriter’s efforts allowed for the depiction in the show to be entirely faithful to history. It also expressed the playwright’s deep lamentation and new interpretation triggered by Liu Pei and Hsiang Yu’s heroic exploits.

The most prominent challenge in the show’s production was how to bridge varied music and languages in different types of operas. As such, the director ingeniously used Hsiao Mi’s Taiwanese Opera singing to connect different parts throughout of the show to avoid direct juxtaposition of Beijing Opera and Taiwanese Opera, as each is characterized by a very distinct language system. The leading female role performer, Chiang Yen-li, interpreted Consort Yu with Hakka singing, which moderately neutralized the originally fiery and vivacious Hakka Tea-picking Opera. Singing in a gentler and softer tune, Consort Yu perfectly harmonized with the character Hsiang Yu, who wore special face paint commonly seen in Beijing Opera.