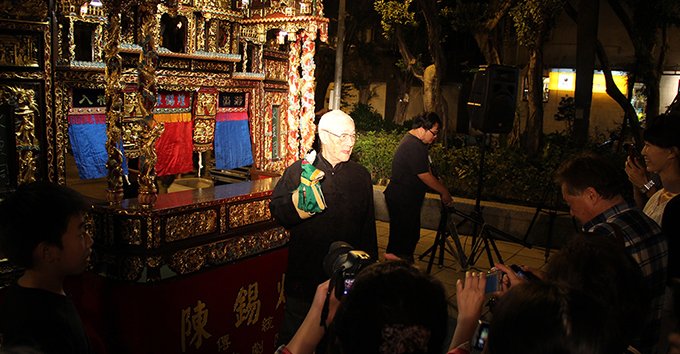 1931-2000 The eldest son of Li Tien-lu
In the year when Chen Hsi-huang was born, his father Li Tien-lu founded the I-Wan-Jan Puppet Theatre Troupe, which determined Chen His-huang’s subsequent life. The I-Wan-Jan Puppet Theatre Troupe rose to prominence rapidly when glove puppetry became very popular after Taiwan’s restoration from Japanese rule in 1945. Young Chen Hsi-huang started to learn puppetry alongside his father, which was, however, not a pleasant experience. His father’s iron discipline once made Chen Hsi-huang travel to central and southern Taiwan to learn puppetry, thereby acquiring different performing techniques himself. To better suit himself to performing on television, Chen Hsi-huang began to explore more exquisite and delicate techniques to animate and manipulate puppets. However, the rise of golden light puppetry was accompanied by the decline of traditional puppetry. The popularity of traditional puppetry was declining in the popular market despite scholars’ high regard for it.

2001~2008 Inventive Chen Hsi-huang
Alongside a group of avid foreign puppetry enthusiasts at the Tai-Yuan Puppet Theatre Company, Chen Hsi-huang embarked on a world tour of creative glove puppetry. During the course of getting in touch with the outside world, Chen Hsi-huang finally awoke to the fact that he was an exceptional international-level puppetry master and his skills of traditional puppetry deserved to be passed down and preserved.

2009-present The Era of Chen Hsi-huang
80-year old Chen Hsi-huang singlehandedly shoulders the mission of passing down the arts of puppetry. Whether it is young learners with neither prior knowledge nor experience or enthusiastic foreigners, Chen Hsi-huang is willing to share the arts of puppetry with them unreservedly. Being multitalented in front stage performances, background music, and costume making, Chen Hsi-haung remains an all-around and rare puppetry artist. Now this puppetry artist intends to pass down his persistence and exuberant vitality in the arts to many more generations to come.