SOAS Centre of Taiwan Studies (CTS) had been held “the February Film Week” annually, and it is the 7th year this earlier February. There were five screenings and three talks within the three-day’s events. Not only choosing the familiar genre for SOAS’s audience of two classic Taiyu Pian (film in Taiwanese language),Encounter at the Station and Six Suspects, but also choosing three contemporary films focusing on Indigenous theme from the very new program of Taiwan Cinema Toolkit last year, including Panya, Lokah Laqi, and Pakeriran.

Regarding to the three talks focusing on discussing Taiyu Pian, three special guests were invited to arouse different discussions, such as the politic and society of Taiwan’s early age, the diverse and hybrid genre of Taiyu Pian, and how to see the current Taiwanese society from Taiwan retro cinema.

Moreover, CTS of SOAS has been paying attentions on Indigenous issues these years, and had cooperated with Native Spirit Film Festival in London last October to screen Long Time no Sea. To further extend people’s interests and discussion, CTS not only choose another three Indigenous films from TCT for the event, and even invited Dr. Chen Pin-Chuan, the former director of Taiwan Film Institute, to introduce Parkeriran before the screening and to hold a Q&A afterwards. Even though it was a rather smaller event, people were highly engaged and gave positive feedback and discussion after the screenings.

From the early Taiwanese film in Taiyu language and the contemporary Taiwan cinema focusing on Indigenous theme, the whole event was a great platform for people to learn the diversity of Taiwan cinema.

Fantasporto: International Film Festival of Oporto, one of the world’s oldest festivals dedicated to genre cinema, celebrated its 40th anniversary during 28 February to 7 March. The theme of this year’s festival revisited renown works by great names of cinema such as Ridley Scott’s The Blade Runner, Bram Stoker's Dracula by Francis Ford Coppola and Martin Scorsese’s Raging Bull. Orient Express, the award specially dedicated to Asian Cinema, had been set in 2004 keeps introducing the vitality of Oriental Cinema and revealing the undiscovered gems to European audience. This year, while Bring me Home by Korean director Seung- Woo Ki got the Best Orient Express Film Award, the Taiwanese commercial horror film Detention by director John HSU won the Special Jury Award in this section. Detention is also the first narrative feature from Taiwan got selected in competition. Nevertheless, films from Taiwan are not unfamiliar choices for audience of Fantasporto. In collaboration with Taiwan Cinema Toolkit, Fantasporto has continually bringing the innovative essence of Taiwan Cinema throughout 1960s to 1980s into programming in the past three consecutive years, started from classic Wuxia masterpieces, a retrospective of director CHANG Tso-Chi, Taiwan Black movies to a glance of female roles in commercial Taiyupian (Taiwanese-language films) in 60s. These programs successfully arouse the interest of the local audience and attracted the local news media Público to conduct in-depth interviews with Taiwanese director and as well as the film scholar.

In celebration of Fantasporto’s 40th edition, Taiwan Cinema Toolkit and Taiwan Docs based under Taiwan Film Institute proudly present a Taiwan Retro program "THE WHEEL OF FORTUNE" with a selection of classic films dating back to 1969 until modern day, both narrative features and documentaries, by the auteurs and directors of new generation. Suggested by the name title, this program consists of three different dimensions to look into people’s fate, or more interestingly the cycle of the film itself. Check out more info below: 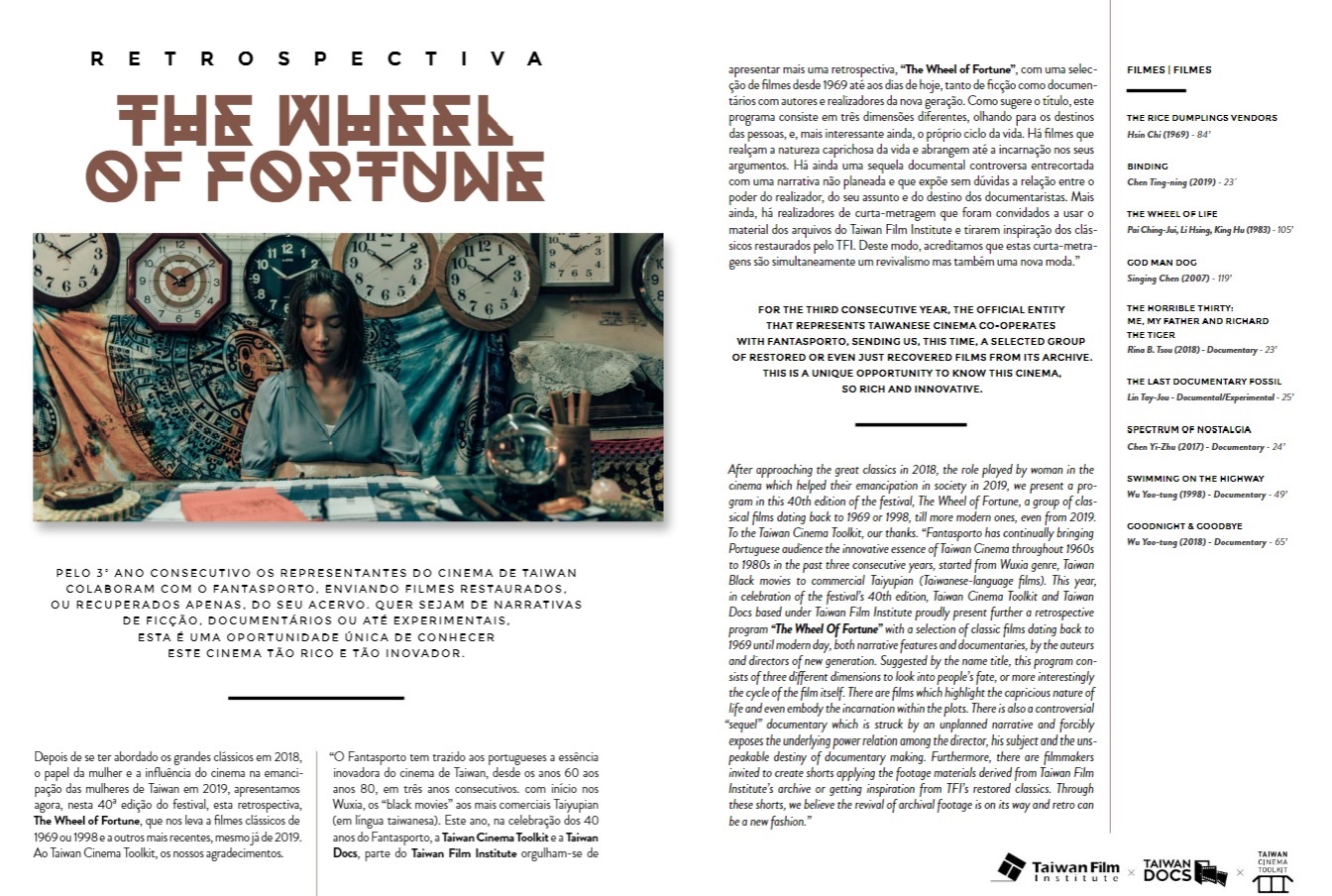