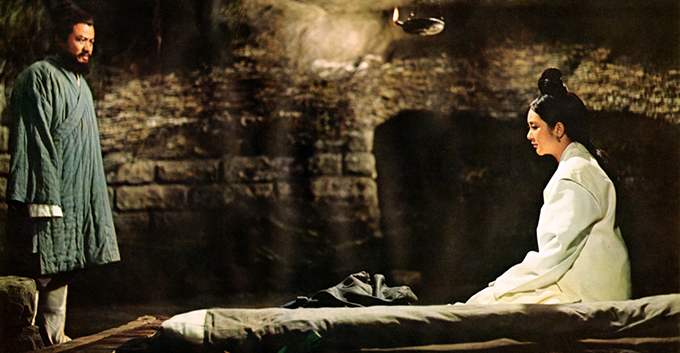 Pei Gang, the only heir for three generations, spoiled by his grandmother since birth, grows into a brute and bully. One day, in a fit of impulse he commits three cruel murders during a brawl and is sentenced to death row. While he unrepentantly stays in prison awaiting execution in the next autumn,...(Read more)

Pei Gang, the only heir for three generations, spoiled by his grandmother since birth, grows into a brute and bully. One day, in a fit of impulse he commits three cruel murders during a brawl and is sentenced to death row. While he unrepentantly stays in prison awaiting execution in the next autumn, his doting grandmother, who always promises she’ll get him out of any trouble, manipulates inside and outside the court to free him. When all her efforts fail, she turns to at least ensure that the condemned grandson produces an heir to carry on the family line. At last, she sends Lian, a girl from her family, into the cell to bear Pei Gang’s child.

Mastering the genre of social-ethical melodrama, director Lee Hsing presents a story of the “redemption of humanity” in this film. Under the patriarchal orders of both familial ethics and national laws, a death row prisoner facing execution next autumn, confronts the question of “what is life” and the issues of what is the “meaning of life.” Finally, he gain enlightenment and is initiated and transformed into a born-again man with spiritual loftiness and depth. Besides its concern for the Heideggerian concept of “being-towards-death” and reference to the biblical “Parable of the Prodigal Son,” the film also delivers a profound representation of China’s patriarchal system. In the film, the court replaces the family’s role in disciplining the rebellious son. However, it also reflects the dysfunction and the deconstructive deficiency of the family. Even if the family tries its best to fulfill its patriarchal mission to ensure its male heir and lineage, it still produces a rebel who poses threat to the social system based also on patriarchy. The two female characters of the family, the spoiling grandmother and the redressing/redemptive wife, are in fact the scapegoats of patriarchy or the scaffold of its structure. Although the court and the cell represent the role of justice, the handcuffs, fetters, shackles, balls and chains, whips, and engine of torture depicted in the film also evoke the impression of Taiwan’s traumatic experience of White Terror and state violence in the 50s and 60s. The whole film is shot at the Central Motion Picture Corporation (CMPC) studio in an effort to design and build a realistic, yet, at the same time stylized period setting, especially the change of the four seasons that highlights the passing of time, which contributes to a subtly-changing spectacle. Besides, the actors’ marvelous performances along with the dazzling mise-en-scène also create intense emotional impact. Such a heightened artificiality in the studio, along with the tight framing and composition featuring cell bars, seems to imply the omnipresence of the suffocating patriarchal order, which is also a miniature and metaphor for Taiwan’s society under then martial law and an authoritarian regime.