A Place of One’s Own 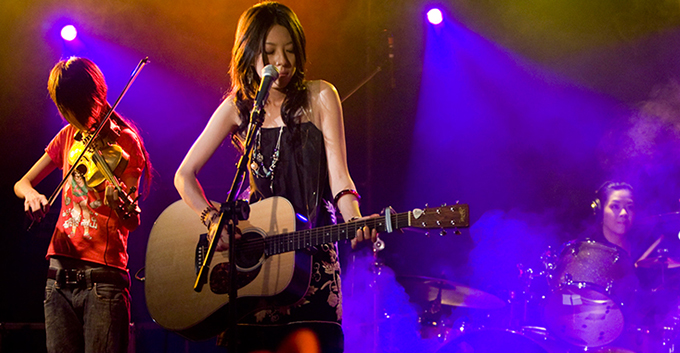 Master Lin makes paper houses—or paper “origami villas”—for the dead. His son Gang has just started working at a real estate agency. His wife, A-Yue, sweeps tombs for a living. She can communicate with ghosts, and often helps them fulfill their wills. This underclass family lives on the border of Ta...(Read more)

Master Lin makes paper houses—or paper “origami villas”—for the dead. His son Gang has just started working at a real estate agency. His wife, A-Yue, sweeps tombs for a living. She can communicate with ghosts, and often helps them fulfill their wills. This underclass family lives on the border of Taipei City. However, the “Fengshui” of their small land is so auspicious that greedy real estate capitalists take it over. Then the spectacular and towering origami villa that Master Lin makes for his family is stolen by gangsters who own a pagoda for ash-urns. Lin’s family is forced to move to a flat. The former tenant of the flat is a rock-n-roll singer, Mozi. Mozi is an idealist and a non-conformist fighting against mainstream record companies. However, his girlfriend Kasey is just the opposite and is now a popular singer. One night, Mozi falls from the building by accident. He becomes a famous tragic hero overnight. While Han people are struggling over land and positions, Taiwan aboriginals, the real owners of this island, are driven away from their ghetto on a river bank near Taipei.

The film’s title, “a place of one’s own”, has multiple layers of meanings. “A place of one’s own” can refer to a concrete space for people to live in—either a place for people who are alive, or paper houses for the dead. The title can also mean “abstract places,” such as one’s social standing in society. It might even be a piece of land in the virtual space of on-line games; a virtual space which ironically could be exchanged for real money. The film’s title can also refer to the real estate whose market values are manipulated by capitalists. In this case, the “use value” of a land or property is replaced by its “exchange value.” Each of these meanings is poignantly presented in this film.

Screenwriters Lou Yi-An and Singing Chen previously explored the sub-topic of “house and home” in Tsai Ming-Liang’ Vive L’amour (1994). In this film, they further collaborate on an extensive and precise script on the same subject. The film’s narrative structure—which employs multiple parallel narratives—duel-oppositions in dialectic diagram, and its highlighting of characters of diverse class backgrounds are reminiscent of Taiwan New Cinema director Edward Yang’s structuralist epic. Although this film offers a serious social critique on capitalism, it also offers a dose of black comedy deriving from Taiwan’s local culture. The central imagery of this film, the grotesque and spectacular “paper mansion,” mocks the greedy rich in Taiwan, yet also showcases Taiwan’s local cultural traditions. Politically and aesthetically, the film continues the tradition of Taiwan New Cinema. However, the black comedy and the “grotesquely colorful” local cultures presented in the film add another layer of “alternative realism” to the aesthetic tradition of Taiwan cinema.