The Wheel of Life 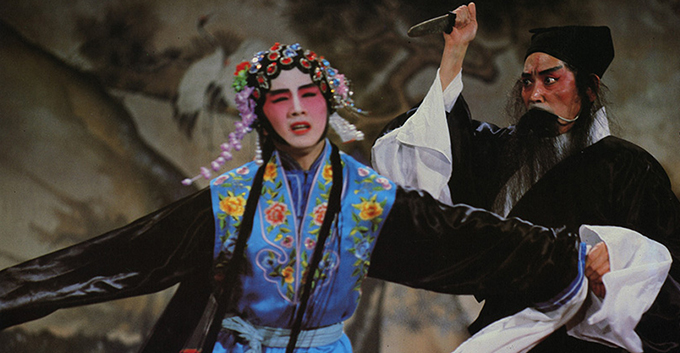 Jointly and respectively directed by King Hu, Lee Hsing, and Pai Ching-Jui, three major Taiwan directors of the 1970s, this film consist of three shorts with the same cast of two actors and one actress, who through reincarnation meet in three different times. Their triangle love and hatred continue ...(Read more)

Jointly and respectively directed by King Hu, Lee Hsing, and Pai Ching-Jui, three major Taiwan directors of the 1970s, this film consist of three shorts with the same cast of two actors and one actress, who through reincarnation meet in three different times. Their triangle love and hatred continue and cross over three hundred years: in the last years of the Ming Dynasty, the uprising swordsmen fight against the secret police; in the early years of Republic of China, a man of rich family falls in love with a diva from a Chinese Opera troupe; in the 1980s in Taiwan, a female modern dancer asks a male shaman to leave his fishing village for Taipei. The three love stories are all intervened and destroyed by a third party. All three romances center on an ancient dagger and end in tragedy caused by it.

While In Our Time (1982) and The Sandwich Man (1983), the heralds of Taiwan New Cinema, depict and investigate Taiwan’s unique social condition and historical trajectory under politico-economic modernization, The Wheel of Life (1983) focuses on “eternity” and “the unchanging” through the traditional Buddhist idea of reincarnation, with its stories crossing three eras. Such a sharp contrast serves as a note on both the shifting of directorial generations and the rise of Taiwan New Cinema in the 1980s. The lineage of Taiwanese cinema experiences both rupture and continuity.

The first story of The Wheel of Life is of the wuxia genre, highlighted with the globally known signature of auteur King Hu. Twenty years later, Ang Lee paid homage to King Hu with Crouching Tiger, Hidden Dragon (2000), which launched a global revival of wuxia. In this film, Hu depicts the collapse of the secret police system of the Ming dynasty, which subtly points to the melting-down of the authoritarian KMT regime in the 1980s. The second story is Lee Hsing’s melodrama about nobodies in a time of great historical significance. It is a frustrated love story typical of Qiong Yao’s romantic films of the 1970s—lovers forced to separate by class conflict or conservative traditions—set against the backdrop of the early years of the Republic of China. It also tackles with the issues of on/off stage confusion and the suggestion that all the world is a stage and all the men and women merely players. The third story directed by Pai Ching-Jui could be regarded as the vanguard of Taiwan New Cinema. In fact, Pai’s Goodbye Darling (1970) is the earliest attempt to set a model for what would become Taiwan New Cinema, yet was ignored and thus failed in this regard. In The Wheel of Life, Pai sends a modern dance troupe based on the Cloud Gate Dance Theatre from Taipei to an islet of the Penghu archipelago off the western coast of Taiwan. There, the modernist, international, abstract and formalistic dance of the troupe encounters and confronts pre-modern, local, ritual and religious trance dancing. The love between the metropolitan modern dancer and the fisherman-shaman has presents a non-traditional take on gender politics. Pai’s work self-reflectively presents the conflict and continuity between the modern and the traditional, the city-country conflict, the root or source of art (growing from the soil or transplanted from foreign soil), the post-colonial condition of Taiwan, and the dialogue between reality and art. It is also a realistic rendering of local society. All these prove that it is the vanguard of Taiwan New Cinema. Immediately after the release of The Wheel of Life, Taiwan New Cinema surged, which renewed and rewrote the cinematic history of Taiwan.