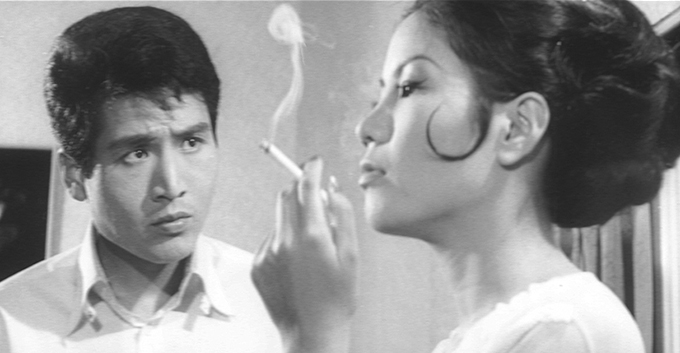 Kuei-Yuan is a deliveryman for a cosmetics store, an easy rider living a womanizer’s life. One day he comes across an innocent and romantic teenage girl, Chin-Mi, who’s trapped in and eager to run away from her lewd single mother’s diner. Kuei-Yuan becomes fascinated with Yu-Chen, a cabaret hostess ...(Read more)

Kuei-Yuan is a deliveryman for a cosmetics store, an easy rider living a womanizer’s life. One day he comes across an innocent and romantic teenage girl, Chin-Mi, who’s trapped in and eager to run away from her lewd single mother’s diner. Kuei-Yuan becomes fascinated with Yu-Chen, a cabaret hostess who is hunting new girls to expand her “business.” Kuei-Yuan introduces Chin-Mi to Yu-Chen, and she becomes mistress to an old billionaire. Hurt by Kuei-Yuan but already in love with him, Chin-Mi sleeps with both him and the billionaire. Meanwhile, Yu-Chen controls Kuei-Yuan with her money and body in an attempt to distance him from Chin-Mi. Then Chin-Mi finds herself pregnant, but Kuei-Yuan demands an abortion. Heartbroken and exhausted, Chin-Mi leaves and goes into hiding. This blow finally teaches Kuei-Yuan the meaning of love, and he takes great pains to look for Chin-Mi. When, in the end, he finds her, he confesses his love and promises her a future of happiness.

Of all Hsin Chi’s works, or even all extant Taiwanese movies, this film is the most poignant and critical. Coming long before the 1990s works of Tsai Ming-Liang and in opposition to the then-prevalent “Healthy Realism,” Hsin Chi focuses on the low, the outcast, and the dark corners of Taiwanese society. The film depicts materialism and money games, and lays bare the idea of sex as pure carnality, without love or affection. The exchange of sex for money makes the three main characters pimp, prostitute and procuress. All exchanges involve power and politics. The transition of Taiwan from a rural society to an urban one led to social polarization, which appears as a series of oppositions in this film: deliveryman’s motorcycle vs. trendy sedan, poor everyman vs. rich capitalist, rented room in a ghetto vs. villa in the suburbs, a girl selling her young body vs. a rich woman buying sex. Power hinges not merely on class but also on gender, as this film subverts the traditional gender hierarchy: men, rich or poor, young or old, all yield to women and sex. The one that dominates all (both sex and money) is the cabaret hostess.

The stark, dark social realism of this film is rendered through a modernist, even avant-garde form, reminding audiences of French New Wave or early Nagisa Oshima (in particular Cruel Story of Youth, 1960): a long take of an angry young man on his motorcycle circling, its engine howling; a variety of pop songs raging on soundtrack; a montage of neon lights at urban night; composition-in-depth in conflict scenes; a daunting shot overlooking a sex act done on the floor; an open ending. Dangerous Youth remains a classic of Taiwanese cinema.