Where the Seagull Flies 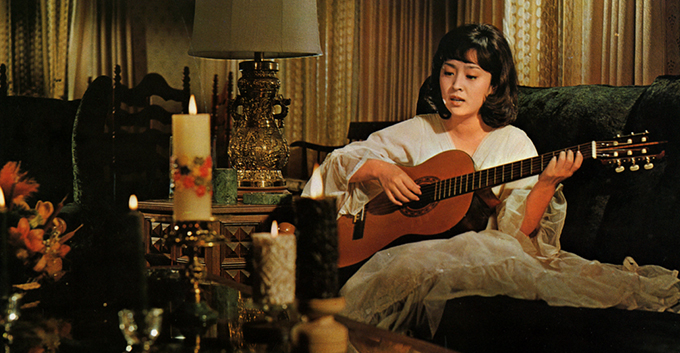 Handsome journalist Muhuai meets three mysterious girls who look completely the same and who vanish right after he falls for them. In Hong Kong, she is a woman who has just killed her husband. In Singapore, she is an unknown singer in a night club. And back in Taipei, she is his younger sister’s col...(Read more)

Handsome journalist Muhuai meets three mysterious girls who look completely the same and who vanish right after he falls for them. In Hong Kong, she is a woman who has just killed her husband. In Singapore, she is an unknown singer in a night club. And back in Taipei, she is his younger sister’s college classmate. After much investigation, he learns the truth: she is the reckless child of a relatively rich family who likes role-playing and playing tricks on men. Cheated and hurt, Muhuai plans to take revenge and punish her.

Qiong Yao’s romances were popular in the 1970s, but in hindsight there is as much “meta-romance” to this film as actual romance. First of all, Qiong Yao movies have a tradition of blurring the lines between fiction and reality as on-screen lovers are also often couples off-screen as well, which holds true for this film. Secondly, in the first half of the film, Chen Chen, one of the pillar actresses of Qiong Yao movies, plays three female characters of different classes, social statuses, and temperaments, deftly demonstrating her acting skills. Moreover, the three puzzling encounters, if extended, could be the openings of three possible love stories. Her “performance of identities” reminds audiences of Hitchcock’s Vertigo (1958), arousing a series of questions: Which woman actually fascinates Muhuai? Or it is just the confusion that makes him feel that he is in love? Apart from the implied skepticism about love and its myth, this film overtly reveals the ugly truth about marriage. In the film, marriage is nothing but an economic exchange and a patriarchal alliance between two families. The most “romantic” part of this film, ironically, is the confrontations and conflicts between the two lovers, which is close to the genre of “screwball comedy.” Furthermore, the typical obstacles to the fulfillment of love in Qiong Yao movies are class-based or social; however, here it’s the two middleclass lovers’ personalities (stubborn and sarcastic) that set them against each other. After a series of coincidences and complications, they finally get together—despite the hurt and trauma they’ve inflicted upon each other, and despite the idea that their love might be nothing but repentance.

Qiong Yao movies overwhelmed audiences in the 70s, which was a decade of economic takeoff, the emergence of the middle class, and urbanization for Taiwan. Thus, the screen reflects and projects the audience’s imagination and expectations about how the “modern life” of men and women should look, including their romantic, professional, and family lives. The choice of shooting locations in Hong Kong, Singapore, and Taipei—mainly tourist spots and cityscape panoramas—reflects the popularity of Qiong Yao movies in Southeast Asia. Taiwan cinema, under the framework of the “Asian Cold War,” swept Southeastern markets with its pan-Pacific productions. In other words, Taiwan cinema in the 70s, including Qiong Yao movies, was the forerunner of modern Chinese-language cinema.