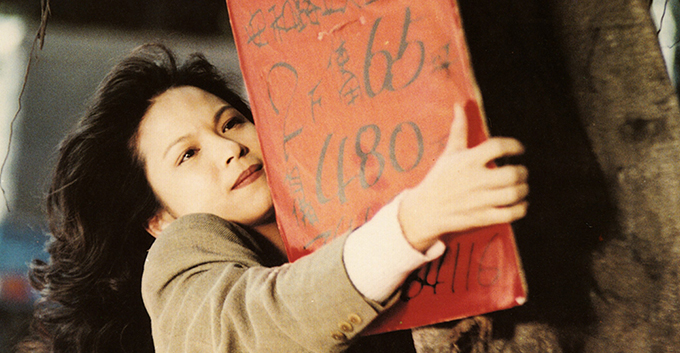 Mei is a real estate agent. Hsiao-Kang sells spaces for funerary urns. A-Jung is a street vendor selling women’s clothes. The lives of these three strangers intersect one day in a vacant apartment for sale in Taipei. Mei has keys to houses for sale and makes good use of them, whether for naps ...(Read more)

Mei is a real estate agent. Hsiao-Kang sells spaces for funerary urns. A-Jung is a street vendor selling women’s clothes. The lives of these three strangers intersect one day in a vacant apartment for sale in Taipei. Mei has keys to houses for sale and makes good use of them, whether for naps or quickies. One day she carelessly leaves the key in the lock of an apartment. Hsiao-Kang steals the key and sneaks in, taking a bath, getting dressed in a gown, and then almost cutting his own wrist there. Another night Mei comes across A-Jung on street and seduces him. The pair return to one of Mei’s apartments, and as they have sex on the bed, Hsiao-Kang is underneath, masturbating, and possibly fantasizing more about A-Jung than Mei….

This was Tsai Ming-Liang’s second feature, and is the film with which he established his authorial signature of minimalism, with a simple story, few shooting locations, sparse dialogue, only three actors, and no music but ambient sound. In a sense, it is a “silent film.” The title is an early reference to the French New Wave’s influence on Tsai, which is more explicit in What Time Is It There? (2001). It is also ironic, as there is more passion than affection, and desire dominates, leaving no room for love. These isolated and alienated urban drifters, of whom Tsai portrays the daily routines in detail, connect not as souls, but as bodies. Tsai turns his camera from the rotten western district in Rebels of the Neon God (1992) to the eastern district of Taipei, a rising area for the middle class and white-collar workers. Modernist architecture and skyscrapers sprout and spread there, and through Tsai’s lens they appear like the gloomy city of Antonioni. Men and women wander on dreary streets, passing each other or seducing each other in dark alleys. The ennui of modern life and the emptiness after a chance fling parallel the wasteland-like, ruinous cityscape. The image of desire and despair in the urban desert culminates in the final scene, considered a classic: the film ends with a long take of Mei walking across a wasteland/park, followed by an astonishing six-minute close-up of Mei sitting alone on a bench, crying.

Tsai also explores the meanings of “house” and "home" and their relationship. On the one hand, highly sensitive to house and space, Tsai is a master of mise-en-scène, framing, and composition-in-depth. On the other, "home" or "family" is one of Tsai’s motifs, on which he holds a rather radical position, deconstructing heterosexual-patriarchal families. Some critics even claim that, in this film, when the homeless three occupy the vacant apartment, they in fact constitute a subversive “queer family.”