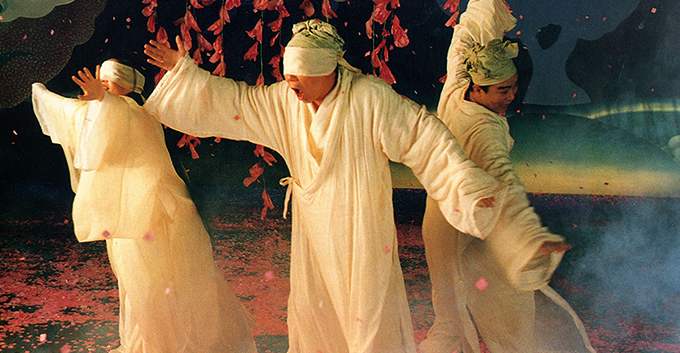 Two drama troupes happen to have to share the same auditorium for their rehearsals, and thus three stories intertwine on stage and screen. One is the play being rehearsed called “Secret Love,” which begins with two lovers on a moon-lit date in a Shanghai park and ends in a hospital in Taipei, where ...(Read more)

Two drama troupes happen to have to share the same auditorium for their rehearsals, and thus three stories intertwine on stage and screen. One is the play being rehearsed called “Secret Love,” which begins with two lovers on a moon-lit date in a Shanghai park and ends in a hospital in Taipei, where the two aged lovers meet again after forty years of separation caused by the Chinese Civil War. The second story is the play by the other theatre troupe, “Peach Blossom Land.” Fisherman Tao leaves his wife, Spring Flower, who has had an affair with another man. Tao by chance enters a dreamlike utopia named “Peach Blossom Land,” where Tao lives a carefree life and regains peace and tranquility. However, he still misses his wife in the outside world and returns home, only to find his wife and her lover have had a child and another failed marriage. The third story takes place between the two conflicting troupes and between the stage and the backstage.

Theatre director Stan Lai and his Performance Workshop successfully adapted their popular play Secret Love in Peach Blossom Land for the screen. The narrative of the film consists of several displaced “dramas-in-dramas,” a “meta-theatre” which creates a non-traditional alienating effect and echoes the theme of the film: “life is just like a dreamed play,” and the sadness when fiction and reality meet and mingle. “Secret Love” uses a personal story to reflect a public history, telling a Chinese epic through the romance between two mainlanders. In the chaos of the Chinese Civil War, many lovers were separated by the split between mainland China and Taiwan, so were thousands of families. It is a nostalgic and sentimental story about the collective melancholy memory of those who retreated from mainland China to Taiwan in 1949. “Peach Blossom Land,” in contrast, is a timeless farce, an anti-romance full of sarcasm and nihilism, laughing at the supposed sacredness of “eternal love.” The banality of mundane marriage buries love, yet a passionate affair is incapable of reviving or redeeming love—what it leads to instead is yet another marriage. “Peach Blossom Land” in the film is a rich tapestry, the Shanghai park (representing lost and thus long-lived love); the “New China” which idealistic Chinese youth dreamed of (a utopia which failed in political reality); Taiwan, the Ilha Formosa, the “beautiful island” (where the mainlanders and KMT take refuge); the motherland (the China of the mainlanders’ nostalgia); and youth and love (one’s golden years). In the end, Peach Blossom Land is a dreamland, and utopia turns easily into dystopia. And one is always in love with what’s lost. However, the real Peach Blossom Land perhaps only exists on the stage, on the screen, and in art.