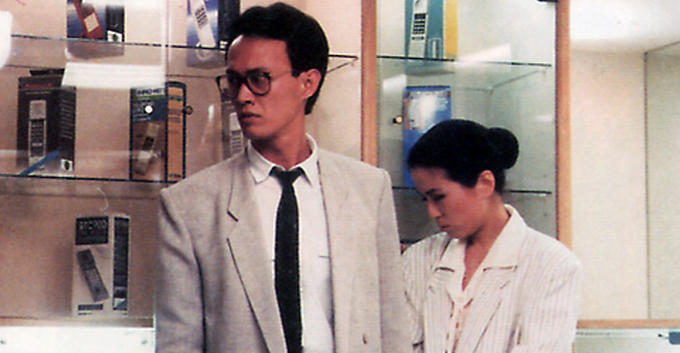 Set in 1980s Taipei, the film shows three groups of complete strangers whose lives intertwine in strange ways, making for an enigmatic thriller. An idling teenager, also an amateur photographer, witnesses by chance a police raid on a gang. Excited and curious, he takes several pictures of a girl esc...(Read more)

Set in 1980s Taipei, the film shows three groups of complete strangers whose lives intertwine in strange ways, making for an enigmatic thriller. An idling teenager, also an amateur photographer, witnesses by chance a police raid on a gang. Excited and curious, he takes several pictures of a girl escaping from the scene. Meanwhile, a doctor and his wife, a novelist, are undergoing a marriage crisis. He is involved in power games at the hospital. She has writer’s block and is fumbling through it by having a love affair. The escaped girl, now locked up at home by her worried mother, makes random phone-calls for fun. Coincidentally, she calls the doctor’s wife and claims an affair with him. The wife leaves without a word and adopts the confusing interlude as the subject of her new short story, which later wins a literary prize. After the photographer meets the girl he’s obsessed with, she goes to meet the doctor in a love hotel, while the latter has a pistol with him.

Edward Yang’s camera is regarded as a surgical knife of intellectual analysis. He poignantly dissects the urban wasteland, imprisoned men and women, and the structure and texture of modern society. His grand narrative and panoramic view led to his Taipei epics. Yang’s modernism (anti-classical narrative, sight/sound dialectics, and open ending), his framing and foregrounding of cityscapes, and his insights into the alienation of the bourgeoisie, especially women, rival Michelangelo Antonioni.

The Terrorizers marks Yang’s maturity of modernist aesthetics and rises to the level of a classic of Taiwan New Cinema. Its multiple narratives intertwine not with Hollywood “coincidence,” but with “chance,” a distinct feature of modern city and society. Traditional solidity, such as a commune or a union, falls apart with modernization and capitalization. Then isolated individuals or estranged strangers, drift in an atomized society and meet in anomie amidst the rapid social-economic growth in Taiwan during the 1980s. With such a narrative strategy, Yang evokes the high tension and repression on the eve of the lifting of Martial Law. The society is on the verge of breaking out, and Yang’s modernist style perfectly matches the state of things. What’s more, Yang introduces into the film other two art forms, photography and novel, to experiment with cinematic language and probe the dialectics between the fictional and the real, which figures a great deal in Taiwan New Cinema. The famous open ending, the trigger-pulling and the nausea, is dreamlike and highly intellectual, inviting the audience to reflective thinking.