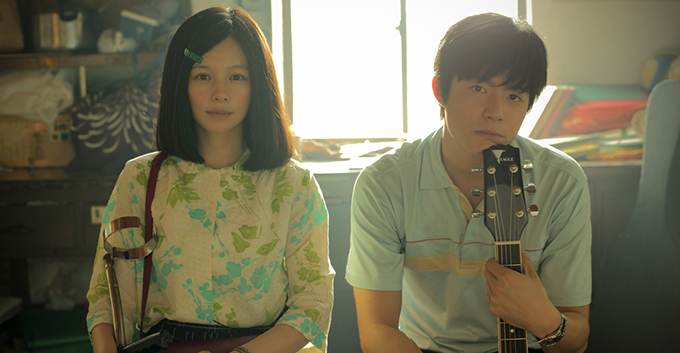 “Juliet's Choice” It is the 1970s and Taiwan is under Martial Law. Hsiu-Chu, a lame young woman, labors in a printing shop. One day a young college boy, Ro, comes with a flyer/pamphlet of political dissent, but the cautious boss rejects the job. Hsiu-Chu helps the idealistic boy make copies in priva...(Read more)

“Juliet's Choice” It is the 1970s and Taiwan is under Martial Law. Hsiu-Chu, a lame young woman, labors in a printing shop. One day a young college boy, Ro, comes with a flyer/pamphlet of political dissent, but the cautious boss rejects the job. Hsiu-Chu helps the idealistic boy make copies in private, and falls in love with him. But the gap of social status separates them and hurts her. Then she makes a dark decision.

“Two Juliets” It is now the 1980s. Juliet, daughter of an itinerant vaudeville troupe, falls in love with Ro, son of a puppet troupe. Their fathers are long rivals for performance in local festivals. Juliet and Ro secretly date in a nearby asylum. When their love affair is discovered, Ro and his father are forced to leave, but Ro asks Juliet to fake insanity and wait for him. She waits there for thirty years.

“One More Juliet” It is one day in 2010. 40-year-old gay Ju, broken-hearted, goes to the mountain to commit suicide. A commercial shooting-crew shows up and stops Ju, asking him to help play an extra. He meets another extra on the set, Ro, whose long passion for a transgendered sexy and popular diva, keeps Ju from suicide.

Following Cape No.7 (2008) and Monga (2010), which led to the revival of Taiwan Cinema, this tripartite film reminds one of two earlier films, In Our Time (1982) and The Sandwich Man (1983), that had a similar structure at the dawn of Taiwan New Cinema. The producer asks three directors of different styles and sentiments to narrate their own versions of Shakespeare’s Romeo and Juliet. Hou Chi-Jan sets “Juliet’s Choice” in the 1970s when Taiwan was still under the Martial Law and in a nostalgic printing house, presenting the tension between political suppression (censorship) and the emerging students’ political movements (dissent clubs in college). The character of the lame female laborer further introduces the issue of class. The movie varies Qiong Yao’s romantic narrative structure, and reflects the dark sides of both the marginalized people and those who try to speak for them through a frustrated love story. Shen Ko-Shang adapts Shakespeare’s motif of “the double,” playing with the opposition of two local and grass-root theaters and the love between the kids from the two parties. Shakespearian “lunatic lovers” get more intricate here when the girl plays mad in the insane asylum. Finally, three Juliets appear in this section (despite the title “Two Juliets”): while two are initiated and liberated, one punishes the unfaithful boy. With Tropical Fish (1995) and Love Go Go (1997) Chen Yu-Hsun is known as a master of Taiwanese comedy. In this latest film “One More Juliet,” a “Queer Comedy,” famous TV comedians gather to make a commercial. On the stage of such a Shakespearian “meta-theater,” a gay man meets another gay man, while the latter has for decades loved a transgender man/woman.