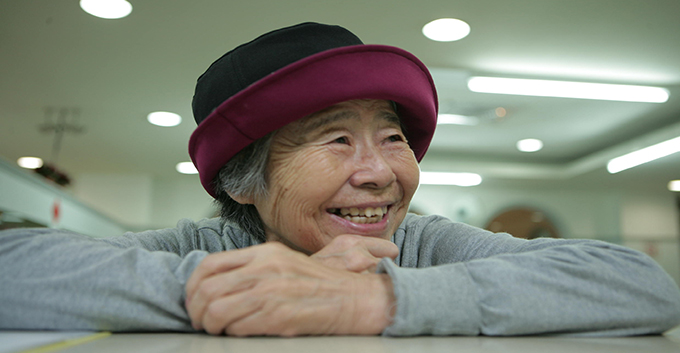 This is a portrait of patients of Alzheimer disease: Hsu Ching-Chen tends to be forgetful about the fact that her husband is long gone, except when she arrives at the national cemetery for veterans on the annual Tomb-Weeping Day. A devout Catholic aboriginal woman, Wen Ruo-Ying always mistakes some ...(Read more)

This is a portrait of patients of Alzheimer disease: Hsu Ching-Chen tends to be forgetful about the fact that her husband is long gone, except when she arrives at the national cemetery for veterans on the annual Tomb-Weeping Day. A devout Catholic aboriginal woman, Wen Ruo-Ying always mistakes some man in the nursing home for a catholic priest or God. She often mumbles about a place that she thinks is heaven. Chen Liang-Wen is a stern and stiff old man with a mercurial temper. He can never remember whether he has had a meal or not, thus he often requests two or more bowls than he actually needs when eating. Yin Shun-Chou was involved in a mission to assassinate Mao Zedong when he was young, but that mission failed. Yin has lived in fear ever since, suspecting that communists have infiltrated the nursing home—and that every caretaker around him is a communist. Wang Huai-Yi is a very elegant multi-racial and multi-lingual woman. She held an important post in the government and taught English for all her life. However, she always forgets about her age and still thinks her father is alive. When the director of the film asks about her age in an interview, she softly reproaches the director for “impolitely asking a lady about her age.”

Taiwan will become an aged society in several years. After Young at Heart: Grandma Cheerleaders (2009), director Yang Li-Chou continues to focus on senior citizens in this documentary; and in particular, senior citizens with dementia. Dementia, including Alzheimer’s disease, makes elder people lose their memory, cognitive capacity, and the ability to take care of themselves. Set in a nursing home and focusing on several families, the director interviews senior citizens, their family members, and professional caretakers. Family members of senior citizens try to recollect forgotten memories with family albums and souvenirs. They also revisit significant places in their life and reunite with lifelong friends. In this process, the elderly are supported and comforted. The family members also repair, reshape, and rebuild their relationships.

Despite its humanistic and sentimental approach and its focus on individual representations and personal life stories, this documentary is a panorama of Taiwanese society and history. After all, all memories, including individual memories, are collective. An isolated old man losing his memory can be seen as a metaphor of the forgetful Taiwanese people. The attempt to recall the lost memories of the elderly is therefore also an effort to recollect the forgotten (or even obliterated) Taiwan history. To cite a couple of cases as examples, the pious indigenous woman is an embodiment of the cross-cultural encounter between Western missionaries and Taiwan’s indigenous peoples in the 17th century. Yin, a veteran in his seventies who was involved in an attempted assassination of Mao Zedong, represents Taiwan’s political history. His lifelong fear is not only of infiltration by the CCP but also by the KMT’s secret police. This invokes associations with the Cold War, White Terror and the Martial Law periods in Taiwan’s history. The old English teacher Wang Huai-Yi embodies Taiwan’s multi-linguistic hybridity, as well the collective anxiety of Taiwanese people to learn English; the anxiety of a people who received U.S. Aid during the Cold War. Finally, the Alzheimer’s of the elderly people represents the collective amnesia of the younger generation in Taiwan.