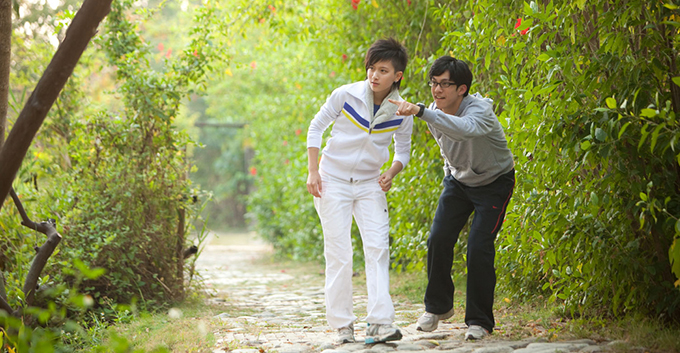 Cool-Ma, a bright teenager, is accidently killed by Yu-Tung while he’s practicing for a marathon at night. Yu-Tung is a teenage girl who dresses and acts as a boy, and rebels fiercely against her family. However, after Cool-Ma dies, Yu-Tung is the only person in the world who can communicate with Co...(Read more)

Cool-Ma, a bright teenager, is accidently killed by Yu-Tung while he’s practicing for a marathon at night. Yu-Tung is a teenage girl who dresses and acts as a boy, and rebels fiercely against her family. However, after Cool-Ma dies, Yu-Tung is the only person in the world who can communicate with Cool-Ma’s spirit. Thus, Cool-Ma asks Yu-Tung to help deliver messages to his mother. He wants Yu-Tung to comfort his mother, since Cool-Ma’s mother has broken down after his death. Cool-Ma’s mother is consumed by her desire for revenge—to a degree that sometimes her mental state borders on hysteria. Throughout the process of their communication, Cool-Ma and Yu-Tung gradually become friends. Yu-Tung even slowly changes under the influence of Cool-Ma. In the end, Yu-Tung joins the marathon team to fulfill Cool-Ma’s dream. She arrives at the final line of the game, where Cool-Ma’s mother waits. In so doing, Yu-Tung is finally able to deliver Cool-Ma’s messages to his mother and earn forgiveness from her.

Director Wang Shaudi is a master of the “drama of ordinary folks,” especially the genre of comic family-drama. After making Grandma and Her Ghosts (1998) and Bear Hug (2004), both are films made for kids in Taiwan, Wang turns her lens to teenagers’ lives in Fantôme, où es-tu?. This film is adapted from a real social event in Taiwan. Wang sets several binary oppositions on issues of gender identity, social class, family structure, and teenagers’ subcultures. As the narrative goes, these oppositions undergo a dialectic development, and the boundary between these oppositions becomes more delicate. For instance, to rebel against a patriarchal family that prefers boys over girls, Yu-Tung identifies with boys and acts as one. Her participation in motorcycle races on streets is a manifestation of her self-identification as a macho boy. In contrast, Cool-Ma has many qualities traditionally perceived to be “women’s characteristics.” He is considerate, caring, and good at doing housework. Moreover, Cool-Ma challenges Yu-Tung’s conception of masculinity by arguing that “speeding on a motorcycle is not manly, yet completing a marathon on one’s own is.”

Yu-Tung and Cool-Ma’s families also represent the class divide in Taiwan society. Her mother is an international white-collar manager, while Cool-Ma’s mother is a blue-collar laborer. Despite the class difference between two families, the two mother’s love for kids is equal. More importantly, the film suggests that single parents do not necessarily raise “problematic” teenagers. Rather, it is the “normal families” that are often responsible for producing social problems. Finally, the film also probes the issue of “forgiveness” in Taiwan society. Victims of social and historical incidents could turn into those who perpetrate violence if they allow themselves to be consumed by the desire for revenge. Through the soul of the dead (represented by Cool-Ma’s ghost), the film asks how one can assume social responsibility and forgive those who have hurt you. It also asks the question of how genuine reconciliation can be achieved in a society previously torn apart by social and political turmoil. These questions are particularly important, for they touch upon the debates about whether the death penalty should be abolished, a hot-button issue in contemporary Taiwan. It also implicitly responds to the difficult question of how to heal collective political traumas and achieve Transitional Justice after years of political repression.