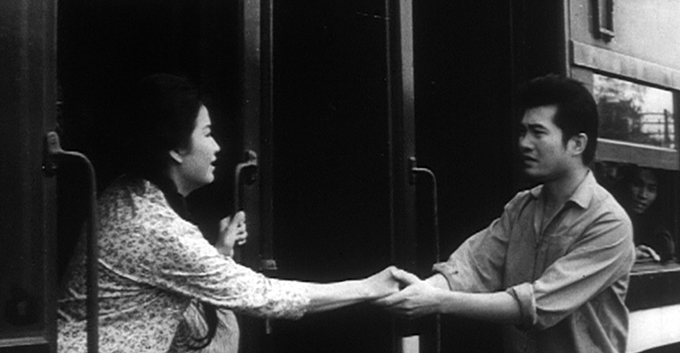 Xiulan and Huotu grew up together in the same village in Changhua County, and they love and are committed to each other. To pay off her family’s debts, Xiulan goes north to Taipei to earn more money. Missing Xiulan, Huotu takes the train to Taipei, only to find that Xiulan works as a nightclub dance...(Read more)

Xiulan and Huotu grew up together in the same village in Changhua County, and they love and are committed to each other. To pay off her family’s debts, Xiulan goes north to Taipei to earn more money. Missing Xiulan, Huotu takes the train to Taipei, only to find that Xiulan works as a nightclub dancer. Ashamed and heartbroken, he takes the early train from Taipei to return home. Xiulan fails to make him stay and becomes depressed. The nightclub boss sees his chance, gets Xiulan drunk and rapes her.

This film is a standard “miserable Taiwanese movie,” characterized by the vicissitudes of fate—joyful meetings, painful partings, dramatic twists and turns, chance and accidents—and thus is a tear-jerker. Many 19th century realistic novels adopted females as their protagonists—Nana, Anna Karenina, Madame Bovary, and Sister Carrie—to portray social changes thorough the tragedies of these women. Likewise, this film uses the narrative framework of “Portrait of a Lady” to tell the tragic story of Xiulan’s adventures in the city. Post-war Taiwan rapidly grew from a society where agricultural production supported industrial production in the 1950s, to the industrialization and urbanization of the 1960s, with an accompanying population outflow from villages to cities. This film sets the story of Xiulan against such a backdrop and shows the collective imagination about urbanization: the sharp contrast between the good and virtuous countryside vs. the vicious and sinful big city. The country-city conflict is portrayed through idyllic scenery of villages vs. dark scenes of the nightclub, folksy flute vs. jazz-band trumpet, and Taiwanese pop songs in the Japanese enka style vs. American jazz. Patriarchal ideology holds that females are more fickle and easily tempted than males; thus, Xiulan’s loss of her virginity and her disfigured face symbolize her loss of innocence and her “fall.” The idea of the female body as the carrier of social change or transformation also appeared 20 years later in Chang Yi’s Kuei-Mei, a Woman (1985). In fact, there is exploitation in the countryside as well, such as the usurer who drives Xiulan to leave for Taipei in order to earn some quick money. In contrast, the city can offer pleasure and liberation, which Xiulan experiences through dressing up and dancing—and her tragedy might be seen as patriarchal punishment of her penchant for urban fashion. Trains and stations recur in this film, implying on the one hand the shortened distance between city and country, and on the other symbolizing the “wheels of progress,” which run over those who fail to get out of the way. Huotu is an example.

The ending of the film is paradoxical: a blind Huotu demonstrates his lifelong love for the facially deformed Xiulan. It seems that, ironically, only when a man loses his sight—a metaphor for casting aside the patriarchal fetish for fair female faces—can he love an unsightly woman.