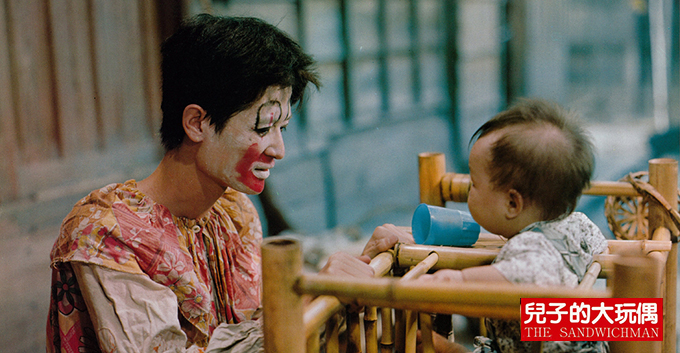 Adapted from novelist Huang Chun-Ming’s three short stories: “The Sandwich Man”, “Vicky's Hat”, and “The Taste of Apples”. The omnibus film showcases several downbeat characters who struggle to survive in the developing country of Taiwan. The film depicts, sympathetically, their self-depreciation an...(Read more)

Adapted from novelist Huang Chun-Ming’s three short stories: “The Sandwich Man”, “Vicky's Hat”, and “The Taste of Apples”. The omnibus film showcases several downbeat characters who struggle to survive in the developing country of Taiwan. The film depicts, sympathetically, their self-depreciation and self-respect, laugh and tears, and hope and despair.

“The Sandwich Man” ("Son's Big Doll"): To look after his wife and newborn baby, Qun-Shu dresses up as a clownish “sandwich man,” a walking movie poster. His job is to roam up and down the streets and alleys of a small town in Chiayi County all day long to advertise new films. With no dignity and no prospects, the job weighs on Qun-Shu, making him depressed. Luckily, the theater boss offers a tricycle and megaphone for him. Finally he can remove the clown makeup, only to find his son can no longer recognizes his father.

“Vicki’s Hat”: Wang and Lin, two fresh young salesmen, are sent to a coastal town to sell Japanese pressure cookers. Wang meets a mysterious little girl, Vicki. She never removes her hat, which seems to cover some tragic secret. Lin’s wife sends a telegram about her miscarriage, but just as Lin is showing the villagers how the cooker works, an accident happens and it explodes….

“The Taste of Apples”: On his way to work, laborer A-Fa is run over by the limo of American serviceman Colonel Grey, and A-Fa loses his legs on a Taipei street. He is sent to the Naval Hospital in Tianmu, a suburb of Taipei and where the American military is stationed in Taiwan. On hearing the bad news, A-Fa’s family, living in an urban slum, anxiously goes to the hospital with the worry that their life will get worse after the accident. However, they receive significant compensation from the guilty Colonel, ironically striking it lucky off of unluckiness.

In Our Time (1982) and this film launched the Taiwan New Cinema movement of the 80s. Adapted from three short stories by local novelist Huang Chun-Ming, this film is full of humanistic/social critique and realistic affection for the land of Taiwan. The film is set in the 1960s-1970s, a time when Taiwan was undergoing great change socially and economically. This 1983 film looks back on the advances and aftermath of modernization, industrialization and urbanization in Taiwan. Hou Hsiao-Hsien’s “The Sandwich Man” (also known as “Son’s Big Doll” in Chinese) leads spectators slowly through an idyllic pre-modern town. The film is full of Hou’s nostalgia for the rural past. Trains, the symbol of modern world, come with commodities and commercial opportunities, while the underclass either sell their labor or work as advertisements. In the end, Qun-Shu’s baby son can no longer distinguish his father from his clown persona, which symbolizes a distorted and alienated father figure subject to capitalist institutions.

Tseng Chuang-Hsiang’s “Vicki’s Hat” sends two apprentice salesmen to a coastal town in central Taiwan to sell pressure cookers, a product of modern fetish for “speed” and “novelty.” Such a modern product means little to the villagers, who live life at a pre-modern pace. The pressure cooker might explode, and more salesmen could die along highways with the advent of modern transportation. However, the village has its own darkness, which in this film is concealed under Vicki’s hat of the film title.

Wan Jen’s “The Taste of Apples” is a tragicomedy about villagers in a modern city. Following A-Fa’s broken legs, the film leads the audience to an urban slum in modern Taipei, to the low-lifes and the underclass, and to the political arenas of Taiwan and America. In the film, the labyrinthine ghetto and its patchy houses is set in sharp contrast against the grand, orderly, snow-white military hospital. It is imbued with powerful political and class implications. In fact, all three short films feature novelist Huang Chun-Ming’s humanist-leftist critique on imperialism and capitalism. After WWII, American troops were stationed in Taiwan as part of a bulkhead against Communism in the middle of the Cold War. In “The Sandwich Man,” military assistance, charity flour from churches and IUDs manifest America’s cultural hegemony and colonialism in Taiwan. Similarly, Japan’s post-war economic revival in the 1960s was under America’ carrot and stick, and soon Japan poured its modern appliances into its former colony Taiwan, such as the pressure cookers in “Vicki’s Hat.” Therefore, the apples in “The Taste of Apple” might not necessarily be Washington State apples; they could equally be Fuji apples. In total, the three short films present a “critical realism” absent before this film and later always present in Taiwan New Cinema in the 80s, though the three directors also experiment with the language of film in this collection: Hou’s stream-of-consciousness, Tseng’s psychoanalytic modernism, and Wan’s black comedy and political satire.